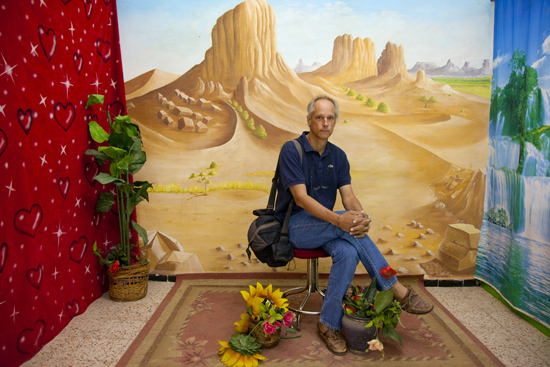 George having a passport photo taken in Tamanrasset, Algeria

Best known for his exploration photography, George Steinmetz has a restless curiosity for the unknown: remote landscapes, our changing climate, and how we can meet the ever-expanding food needs of humanity. A regular contributor to National Geographic and the NY Times Magazine, he has explored subjects ranging from the remotest stretches of Arabia’s Empty Quarter to the largest coal mine in China.

Since 1986, George has completed more than 40 major photo essays for National Geographic and 25 stories for GEO magazine in Germany. His expeditions to the Sahara and Gobi deserts have been featured in separate National Geographic Explorer programs. In 2006 he was awarded a grant by the National Science Foundation to document the work of scientists in the Dry Valleys and volcanoes of Antarctica.

George has won numerous awards for photography during his 35-year career, including three prizes from World Press Photo. He has also won the Environmental Vision award from Pictures of the Year, a citation from the Overseas Press Club, and was named National Geographic’s Adventurer of the year in 2008.

Born in California in 1957, George graduated from Stanford University with a degree in Geophysics. He began his career in photography after hitchhiking through Africa for 28 months. He spent fifteen years exploring the world’s deserts, much of it while piloting a motorized paraglider. This experimental aircraft enables him to capture unique images of the world, inaccessible by traditional aircraft and most other modes of transportation. His current projects are documenting climate change and the global food supply, primarily with professional drones. George lives in Glen Ridge, New Jersey, with his wife, Wall Street Journal editor Lisa Bannon, their daughter, Nell, and twin sons John and Nicholas.