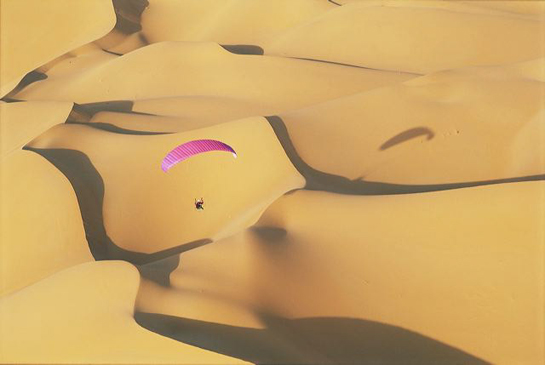 François Lagarde flying over the dunes of the Ténéré, Niger

Many of the aerial photos you see on this website were taken from the seat of the lightest powered aircraft in the world, a motorized paraglider. The aircraft consists of three components: the “wing” of a paraglider (similar to an aerobatic parachute), a back-pack mounted motor, and a single-seat harness that ties the three pieces together. It is launched by laying the paraglider out on the ground behind me like a kite, and with the motor idling I run forward, inflating the cells of the glider as it rises overhead. When I give it full throttle, my motor has about 175 lbs of forward thrust, which lifts me off the ground after some twenty to 100 steps, depending on altitude and wind conditions. The wing flies at only one speed, approximately 30 mph (48 kph) and I steer with a combination of weight-shift and pulling on the kevlar lines attached to its trailing edge. These act like flaps on a conventional airplane. Pull (and lean) right, turn right, etc.. The motorized paraglider is in many ways the best possible platform for aerial photos, as I have an unrestricted view of 180° in both horizontal and vertical directions, like a flying lawn chair. It’s also relatively quiet in flight, like a moped, and it lets me fly low and slow over the ground with a minimum of disturbance to people and animals below. I’ve launched at elevations ranging from 14,450 ft (4,400 m.) to -1,388 ft. (423 m.) below sea level. While I can usually gain as much as 6,000 ft. (1,800 m.) on a flight, I find it most effective at 100-500 ft. (33-160 m.) above ground. This gives me a more intimate view of the landscape, and as I’m piloting it myself, I can search out the precise point in the sky to visualize a picture.