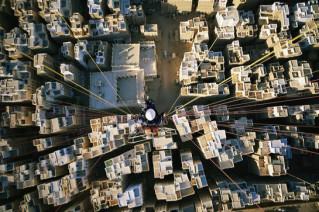 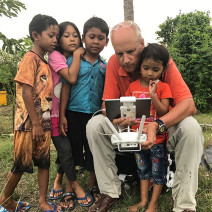 Flying for me is a little hectic, as I have to pilot while I take pictures. Because it’s so light, it’s safer in emergency landings than almost any other aircraft. The complete aircraft with fuel weighs less than 100 lbs (45 kg.) and I land on my feet, with my first steps being skid marks. There is no wheel to get stuck in the sand or bounce on irregular terrain. I’ve had my share of mishaps, like landing in the ocean while photographing whales, or getting dragged across a dry lake in a sand storm, but generally speaking, if I had used any other kind of aircraft than this for what I’ve been doing, I probably wouldn’t be alive today.

Most of my current aerial work is done with professional drones, as it’s the best platform for the things I’m photographing these days. Most of my subjects now are in environments where I can’t make emergency landings, and with Google Earth, I can scout locations before I take to the sky. Drones also allow me to have a stationary, rather than a continuously moving, platform so that I can shoot stable video or take pictures in dim light. I still use the paramotor on occasion, as it has unique possibilities for scouting and exploration, and allows using hand-held cameras, but increasingly a drone is the best tool for the job. While drone piloting is certainly not as physically satisfying as paragliding, it’s a lot easier and safer. My reason for flying is pictures, and I’m genuinely excited about the new possibilities they have opened up for me.