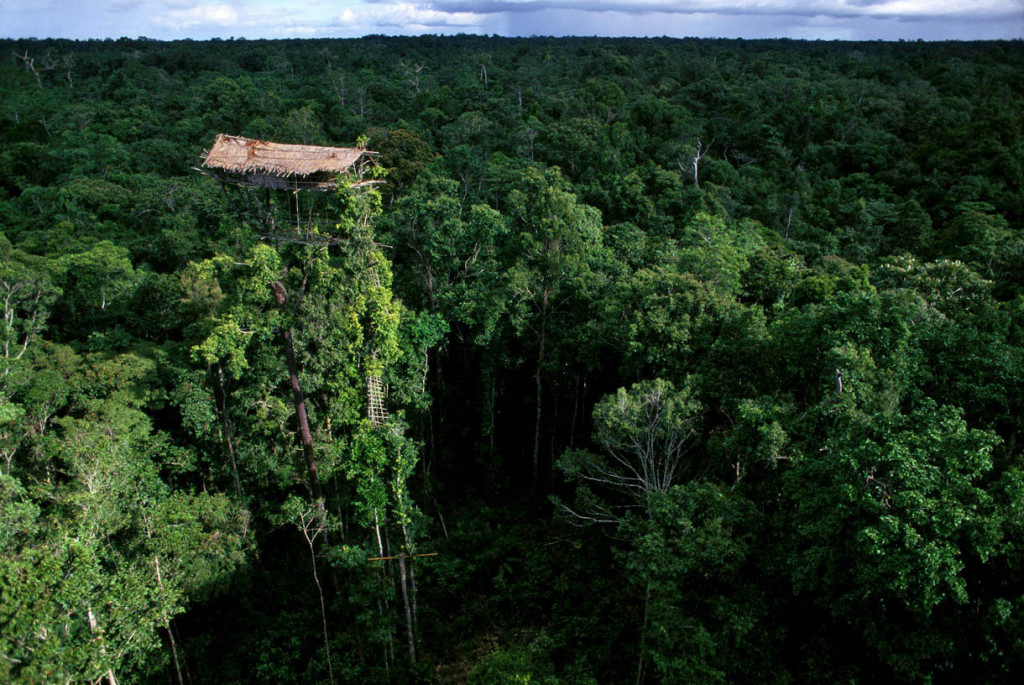 In 1995 I had the rare opportunity to document clans of tree-dwelling people in Indonesian New Guinea that had no prior contact with anyone outside their language group. I went there with Gerrit Van Enk, a Dutch missionary-anthropologist who at the time was the only outsider who spoke their language. Together with his missionary friend Johannes Veldhuizen, we crossed what Gerrit termed the “pacification line”. These Korowai and Kombai speaking-people live in a remote part of the New Guinea lowland forest. They had been seeing overflying aircraft for several years, but aggressively resisted contact with outsiders as they feared it would bring an end to their world. We went there to make as accurate a recording as possible of their way of life before they were inundated by the modern world, as had almost every other culture on the island.

The Korowai and Kombai live in tree houses that stand in clearings they have carved out of the forest. Beyond the pacification line we found people without clothing, metal, or any form of cooking vessel. This reality was made clear by the stumps of trees we saw there that had been felled (literally beaten to death) with stone axes, and resembled giant shaving brushes. Although slowly dying out, there was still cannibalism in the area. Gerrit believed it to be part of their criminal justice system, as most of the tree-dwellers did not believe in natural death. The Korowai believed that most deaths were caused by sorcery, and they would try to find out who the sorcerer was to kill and eat them. It was a very difficult and dangerous environment in which we could only make first contact by first getting an invitation to cross the pacification line through relatives who had married into a neighboring clan. These were not easy invitations to get. We spent six weeks on the ground there, and the photos were published in both National Geographic and GEO Magazines. For the Korowai I think it was a bit like a team of Martians landing in their back yard and then telling them to act naturally, like the Martians weren’t really there. Our experience was steeped in the awareness that we may have been documenting our effect on the Korowai rather than how it was before we arrived, and the pacification line was like a rainbow that was always just outside our grasp. But our goal was to make as accurate a documentation of a vanishing way of life as possible, for them and their future generations as much as for the outside world.